On Stage at the State Presents 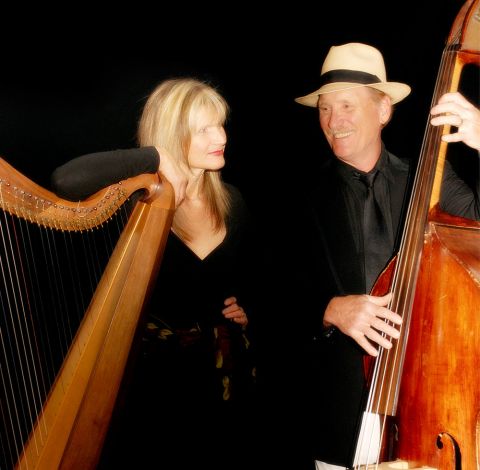 AUBURN, CA (MPG) - Bring your family and friends for an enjoyable evening of acoustic music featuring Christine and Rob Bonner on Saturday, August 24, at 7:30 pm.

Christine is one of the area’s most popular folk harpists, and has performed for many years in concert throughout the West Coast. Christine’s debut album Sand Castles attained a Number 1 ranking on the Americana charts at KVMR radio. Her musical style includes a wonderful blend of Celtic, Latin, Classical, and Jazz.

Rob, a long-time Sierra foothills musician, is well known for his work with South Loomis Quickstep, a Bluegrass band that toured all over the country, and in Europe, performing with many noted and talented artists including Buck Owens, Hoyt Axton, and Emmylou Harris.

Special guest, renowned fiddler Darol Anger, has helped drive the evolution of the contemporary string band through his involvement with numerous pathbreaking ensembles such as his Republic Of Strings, the Turtle Island String Quartet, and the David Grisman Quintet.

Performing with Christine and Rob are dear friends: Guitarist Bill Edwards, who has worked with many bands including South Loomis Quickstep, Way Out West, and currently with Webster Walton Edwards.

Also joining on the bass will be Brett Cole. Brett is well known for his work with the Pyronauts, a very popular “surf” band from the Auburn area, he is a veteran of numerous jazz and classical ensembles, and currently working with the Bob Woods Trio.

Greg McLaughlin, Instructor of Jazz Studies at Sierra College and owner of McLaughlin Studios in Loomis, plays flute and saxophone.